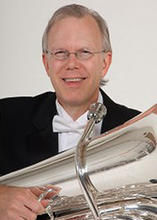 The George Mason University Tuba and Euphonium Ensemble has been in existence for over 15 years. It draws from a diversified student population of both music majors and non-majors.

The group remains as a front runner of the low brass department for recruiting students to enjoy and play chamber music. They strive to represent the musical capabilities of tuba and euphonium by performing new and commissioned works explicitly for them as well as transcriptions of Baroque, Classical, Romantic, Jazz, Rock, and Modern music.

In 2022, international music artists Dr. Beth Mitchell and Ms. Avital Handler offered a masterclass to our Mason tuba students, a clinic on the latest tuba techniques, and a spectacular recital featuring the Mason Tuba Euphonium Ensemble, and Mason faculty Dr. David Porter (tuba) and Dr. Mark Jenkins (euphonium). All music directors, students, and families are invited to these informative sessions.

In 2021, the ensemble did not let COVID stop them from "playing together" at the Tuba Euphonium Day