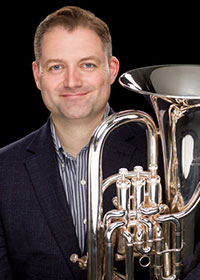 Dr. Mark Jenkins began his musical studies on the euphonium at the age of 11 in his home state of Nevada. During his early studies, he was awarded top honors at state, regional and international solo competitions, including the Nevada Governor’s Scholarship to attend the prestigious Interlochen Fine Arts Camp in Michigan and 1st prize at the 1996 Leonard Falcone International Tuba and Euphonium Competition. After graduation, Mark continued his musical training with legendary euphonium virtuoso and pedagogue Dr. Brian Bowman at Duquesne University, Pittsburgh, then at the University of North Texas in Denton. During his studies at the College of Music, he was again awarded 1st prize at the Falcone Competition in 2000, as well as a 2nd prize at the I.T.E.C. Artist solo euphonium competition in Lahti, Finland in 2001. After completing a Bachelor’s Degree in Music Performance, graduating Magna Cum Laude in 2003, he continued his education at the University of Maryland in College Park, where he was awarded a Master’s degree of Music in 2006. He went on to complete a Doctorate of Musical Arts degree at George Mason University in Fairfax, Virginia in 2017. Dr. Jenkins has been teaching as the Adjunct Professor of Euphonium at the George Mason School of Music since 2012.

Throughout his career Dr. Jenkins has been an active soloist, recitalist and chamber music performer. In 2008, he commissioned and premiered Elizabeth Raum’s Faustbuch, a concerto for euphonium and orchestra, at the Army Band Tuba and Euphonium Conference at Ft. Myer, Virginia. He is also a founding member of the Off-Bass Brass tuba quartet. The group released their debut album Knock Yourself Out in January of 2010 and a second album Tubacus Galacticus in 2015. The following year, Tubacus Galacticus was awarded the Roger Bobo Prize for Excellence in Recording by I.T.E.A. Through this collaboration Dr. Jenkins has commissioned and premiered several new works for tuba-euphonium quartet including Brian Balmages’s Wind Sketches (2006) and Daniel McCarthy’s Knock Yourself Out (2007), both winners of the I.T.E.A. Harvey Phillips Excellence in Composition Award. In January of 2019 Dr. Jenkins released an educational recording, Euphonium Excerpts for Band, through the Summit Records label. The recording is aimed at giving students of the instrument a basic knowledge of stylistic convention and interpretation as applied to many of the principal works found in the concert band repertoire.