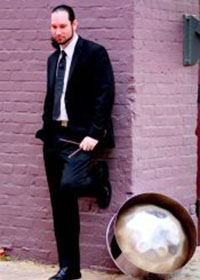 Victor Provost’s performances transcend the expectations of instrument and genre.  With  appearances at major venues throughout the world (including Shanghai Concert Hall, Lincoln Center’s Rose Theater, the Umbria Jazz Festival, and the Kennedy Center) he has been meticulously solidifying his reputation as a master of the Steel Pan and crafting an improvisational voice and style to be reckoned with.  Provost’s ability to extemporaneously weave through complex jazz harmony with accuracy and conviction, while being thoughtful and creative, often elicits the statement “I didn’t know a steel pan could do that”.  He is one of a handful of pan players in the world who have incorporated the foundation of bebop into his playing, and arguably, the only one who has expounded on that vocabulary with a modern sensibility and style.

Born and raised on the island of St. John, Provost was first exposed to the steel pan at age 11, through Steel Unlimited II Youth Steel Orchestra, under the leadership of pan pioneer, Rudy Wells.  It was with this group of extraordinary young musicians that Provost first cut his teeth on the world stage, traveling throughout the U.S., France, Switzerland, Denmark, and Germany.  The Orchestra eventually disbanded, but the experience planted the seed that prepared him to continue learning through several sessions with Wells and, in 2007, an intense year-long study with legendary Jazz Guru Charlie Banacos.

In 1998, Provost became the first steel pan soloist to be featured at the Umbria Jazz Festival in Perugia, Italy. The experience boosted both his confidence in the craft and his musical concept.  Since his move to the United States in 1999, Provost has had recorded, toured, and performed with several award-winning groups (including the GRAMMY Award-winning Afro Bop Alliance) and renowned artists such as Paquito D’Rivera, Dave Samuels, Hugh Masakela, Nicolas Payton, Allison Hinds, Andy Narell, Terell Stafford, and Ron Blake, to name a few.

Along with a demanding performance schedule, Provost teaches private lessons, directs the George Mason University Steel Ensemble, and works with the Cultural Academy For Excellence, one of the premier steel pan music education programs in the eastern U.S.