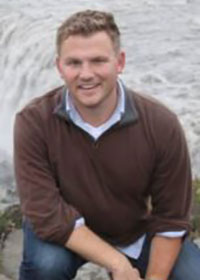 Peter Kimball is an award-winning writer, filmmaker, and scholar. As a director, his short films have played in festivals on four continents and won such awards as Best-of-Fest at the Rochester International Film Festival, Best Comedy at Love Your Shorts Festival, and Best Screenplay at DC Shorts. His 2019 short film “By Any Other Name” continues to play at festivals around the world and has won multiple awards, including the Grand Prize at the Virginia Museum of Fine Art’s James River Film Showcase.

Peter works professionally as a screenwriter with experience in book adaptation, rewriting, and writing for hire. He has worked with a number of major production companies and has had multiple scripts optioned. His feature scripts have placed highly in top screenwriting competitions, including the quarter-finals of the Nicholl Fellowship, the semi-finals of Slamdance, and the finals of Francis Ford Coppola’s American Zoetrope Competition. He is also the only two-time winner of the DC Shorts Screenwriting Competition. He has worked for the Associated Press, Hyphen Literary Management, and the Daily Show with Jon Stewart.

Peter received his B.A. with Honors from Brown University with a concentration in German Studies and an M.F.A. in Film and Electronic Media from American University. His particular areas of academic interest are the dialectics of humor and contemporary European Cinema. He currently teaches at American University and George Mason University.

Peter is an active member of Film Independent, the Mid-America Theatre Conference and is a 2020 Media Arts Fellow - D.C. Commission on the Arts and Humanities.