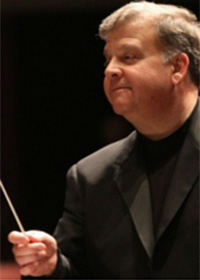 Composer-conductor Mark Camphouse received undergraduate and graduate degrees in music from Northwestern University, where he studied composition with Alan Stout, conducting with John P. Paynter, and trumpet with Vincent Cichowicz. A scholarship from the Civic Orchestra of Chicago enabled Camphouse to study trumpet privately for two years with the late, legendary Chicago Symphony Principal Trumpet Emeritus, Adolph Herseth. Camphouse began composing at an early age, with the Colorado Philharmonic premiering his First Symphony when he was 17. His 30 published works for wind band have received widespread critical acclaim and are performed frequently in the U.S. and abroad. Principal commissions include those by the William D. Revelli Foundation, the U.S. Army Band, the U.S. Marine Band, Northshore Concert Band, and some of America’s finest high school, college-university, and community bands. Camphouse has served as guest conductor, lecturer, and clinician in 43 states, Canada, Europe, and China.  In 2006, Camphouse joined the Mason faculty, where he serves as conductor of the wind symphony and teaches courses in composition and conducting. Other principal artistic, teaching, and administrative positions have included serving as associate director and music division head of the Virginia Governor’s School for the Arts and interim director of Mason’s School of Music.