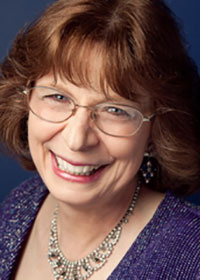 Dr. Linda Apple Monson, International Steinway Artist, serves as the Director of the School of Music in the College of Visual and Performing Arts at George Mason University. A Distinguished Service Professor, Monson was awarded The John Toups Presidential Medal for Excellence in Teaching at George Mason University’s 2018 Spring Commencement Ceremony. The Toups Presidential Medal is presented to “a faculty member whose teaching exemplifies Mason’s commitment to ongoing innovation and excellence in delivering a transformative learning experience to our students.”

Named the George Mason University Distinguished Faculty Member of the Year (2012), Monson also received the Influential Women of Virginia award (2014). Monson delivered two TED-X talks and received the Toastmaster’s International Communication and Leadership Award (2014)“in recognition of outstanding dedication, leadership, and contributions in the areas of education and international understanding.” Monson is the recipient of the George Mason University Teaching Excellence Award (2009) “for exemplary dedication to student learning and commitment to educational excellence.” In honor of the extraordinary impact of Monson’s teaching and music leadership at George Mason University, multiple donors established in 2011 the Dr. Linda Apple Monson Music Endowment Fund. A professor at Mason since 1999, Monson has also served as Director of Music at Springfield United Methodist Church for many years.

A recent $1 million scholarship commitment from Sid and Reva Dewberry to Mason’s School of Music established the Linda Apple Monson Scholars Fund to support talented artist-scholars. Monson was recognized in September 2017 through the renaming of the Grand Tier III of Mason’s Center for the Arts in her honor to the Dr. Linda Apple Monson Grand Tier.

A nationally recognized arts leader, Monson was elected to the National Association of Schools of Music (NASM) Commission on Accreditation, the board granting accreditation for music programs at universities and conservatories across the nation. She was selected for the Fulbright Senior Specialist Roster, in collaboration with the U.S. State Department and the Council for International Exchange of Scholars. Monson served as an International Juror of the Washington Piano Invitational Competition (2013) at the Kennedy Center and was named a Visiting Guest Professor at Nanjing Normal University, China (2010).

Monson served as President of Mason’s chapter of Phi Beta Delta, a national honor society dedicated to recognizing scholarly achievement and excellence in international education. She also served five terms as a Faculty Senator at George Mason University and was elected by the university faculty to serve on the Mason Presidential Search Committee (2011-12). Additionally, she served on the University Provost Review Committee (2018). Serving on the Friends of Music at Mason Board and the Faculty Arts Club, Monson is also a presenter for the Osher Lifelong Learning Institute of George Mason University. In addition, Monson is a frequent performer at Mason as a solo and collaborative piano artist.

A native of central Pennsylvania, Monson earned three degrees from the Peabody Conservatory of Music of the Johns Hopkins University, Baltimore: the Doctor of Musical Arts degree in Piano Performance, the Master of Music degree in Piano, and the Bachelor of Music Education Degree with a double-major in Piano and Bassoon. She also received a Diploma in Piano from Musica en Compostela, Santiago de Compostela, Spain. In addition, she studied chamber music at the Music Academy of the West, Santa Barbara, California. Monson previously served on the music faculties of the College of Notre Dame of Maryland, the Peabody Institute of the Johns Hopkins University, Baltimore School for the Arts, and Northern Virginia Community College. She is married to Dr. Keith L. Monson, a forensic scientist. The Monsons are blessed with two children, Kristofer and Linnea.

Dr. Linda Monson in the news: