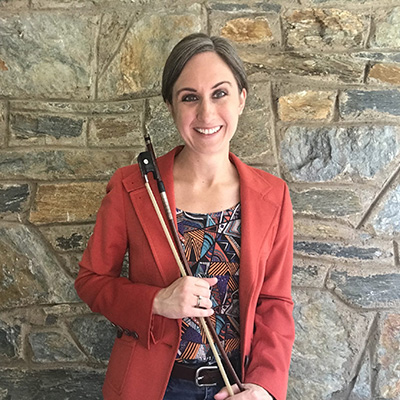 In addition to her work as a performer, Dr. Powell Eig is active as a teaching artist and clinician. In 2019 she served as a clinician for the Young Bassists program at the International Society of Bassists convention in Bloomington, IN. She regularly serves as guest lecturer in Double Bass Pedagogy at the University of Maryland. From 2013 to 2016 she was the director of the Viola da Gamba Society of America Young Players Workshop and her writing on classroom outreach has appeared in Early Music America. She maintains an active private studio and has received grants to support her music education projects from Early Music America, the Viola da Gamba Society of America, and the Lower Manhattan Cultural Council.

She received a pre-college diploma from Julliard, the BA in applied music/double bass from the Eastman School of Music and the MM from Cincinnati College-Conservatory of Music. In 2010, Dr. Powell Eig completed the DMA in double bass performance at SUNY-Stony Brook, as a student of Joseph Carver and Kurt Muroki, where her research focused on the music of Sofia Gubaidulina. Following the completion of her DMA she pursued further private study in historical bass with Rob Nairn. She studied viola da gamba with Christel Thielmann, James Lambert and Martha McGaughey.

As a committed advocate for the arts, Jessica shared her expertise as a grant-writer and fundraising consultant with many established as well as emerging arts organizations. From 2013 to 2015 she served on the Executive Committee of the Viola da Gamba Society of America as Membership Secretary, and she currently serves on the board of the Viola da Gamba Society of Greater Washington-Baltimore. Dr. Powell Eig is a member of the American Federation of Musicians, International Society of Bassists, and Early Music America.