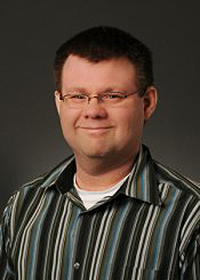 Dr. Jesse Guessford received a BS in music education from West Chester University, a Master of Music in music composition from the Crane School of Music at SUNY Potsdam, and a DMA in music composition from the University of Illinois at Urbana-Champaign.  Guessford has studied composition with Andrew Simpson, Zack Browning, Sever Tipei, Warren Burt, Vinko Globokar, and Lucas Foss. His music has been heard throughout North America, including performances during the SEAMUS Nation Conference, in Europe at the Etchings Festival in Auvilar, France, and in Africa on South African Radio. Guessford has received numerous awards, including the Subito Grant for Emerging Composers, awarded by the American Composer’s Forum. As an associate professor in the School of Music at Mason, Guessford has focused on the scholarship of teaching with and about technology and the music of John Cage.  Guessford is also co-founding director of Music, Motion, Technology, a dance and music collective based in Northern Virginia, creating evening-length works involving dancers, musicians, and interactive audio and visual technologies.