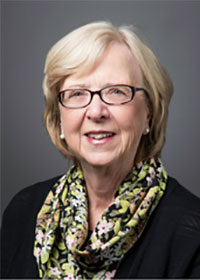 Elaine Rendler-McQueeney, received a Doctor of Musical Arts in organ with minors in theory and liturgy from The Catholic University of America under the tutelage of Daniel Roth (St. Sulpice, Paris) and Conrad Bernier. Before coming to CUA she studied organ with Alexander McCurdy while serving as principal organist at the Cathedral Basilica of SS. Peter and Paul, Philadelphia.

Dr. Rendler – teacher, author, choir director, composer is known principally for her work as a national and international clinician in church music and pastoral liturgy. She has served in music ministry at Georgetown University, the US Naval Academy, Annapolis, and Bellarmine Chapel at GMU. In 2008, she received a National Award for Outstanding Contributions to the Liturgical Life of the Church from the Georgetown University Center for Liturgy. She is the editor of Today’s Liturgy, a quarterly publication for church musicians and author of several books, including In the Midst of the Assembly, and This is the Day. Her Keyboard Praise collections are published by OCP Publications. She is also the founding director of the Georgetown Chorale, whose mission is to provide for the musical excellence of members and community service through music and whose appearances include the Kennedy Center with the Washington Chamber Symphony. She has taught in the music department at Mason since 2000.