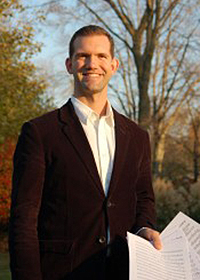 Edward Knoeckel is a composer, pianist, music educator and conductor.

As an educator, he has developed curriculum for community summer arts programs, public education, as well as having held university and college faculty positions in music theory, American music history, music for dance, music for motion pictures, as well as performance practice.

As a jazz pianist, he has performed at national music festivals across the country and abroad. He currently serves as an active duty musician in the US Air Force performing a wide array of styles.

As a composer, he is interested in speaking about the human condition and giving voice to the oppressed. He has received commissions for new compositions from chamber groups, big band, wind ensemble as well as soloists to include Eighth Blackbird, Dimensions in Blue, active duty Air Force and Army Guard bands, National Poetry Society, Hartford Historical Society, as well as large ensembles in the public school system. He has composed and produced music in partnership with the national victims’ advocacy group Pure Hope Foundation to raise awareness of human trafficking and the organization BloodWater to promote humanitarian work in Africa for public health care and clean water.

He has scored numerous films and been a prize winner in the Brooklyn Independent Film Festival for best new score. He teaches Music in Motion Pictures at George Mason. His love of film music led him to doctoral research in the ways that film music conveys meaning about the world around us. He has presented on film music theory at national conferences for the Society of Music Theory, College Music Society and Society of Composers, Inc.

He has conducted bands for the Army National Guard as well as directed numerous music theater productions including, Little Shop of Horrors, L’il Abner (co-directed with Peter Palmer), A Funny Thing Happened on the Way to the Forum, Jekyll and Hyde and The Boyfriend.

He lives with his three children and wife in San Antonio, Texas.