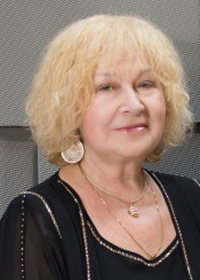 As the three-time prizewinner of the Best Accompanist Diploma at the International Tchaikovsky Competition, her career has brought her to some of today’s greatest concert halls, including Carnegie Hall in New York City, the Teatro Colon in Buenos-Aires, the John F. Kennedy Center for the Performing Arts in Washington D.C., the Palais des Beaux-Arts in Brussels, and the Salle Gaveau in Paris, among many others.

Dr. Balakerskaia is a founding member of the “Ensemble da Camera of Washington”, a trio of musicians from Brazil, Germany and Russia, based in Washington, D.C., and renowned internationally for their “extraordinary technical skill and musical perception.” (Joseph McLellan, Washington Post) The Ensemble has produced several well-praised recordings, while also acting as Artists-in-Residence of the American Youth Philharmonic. They created the Chamber Music Program of the AYPO, where they hold monthly masterclasses and perform a series of concerts. This program is supported by a generous grant from the National Endowment for the Arts.

Additionally, Dr. Balakerskaia is the founder of her own concert series, “Anna and Friends”, regularly held at George Mason University in Fairfax, VA. Besides featuring the “Ensemble da Camera”, Dr. Balakerskaia has also had the distinct pleasure of featuring world-renowned violinist and conductor Zino Bogachek, with whom she has recorded several CDs, and great pianist Darya Gabay, Dr. Balakerskaia’s daughter-in-law.

Dr. Balakerskaia has had a distinct teaching career, serving on the faculties of the St. Petersburg and Moscow conservatories. She currently is in her eighteenth-year teaching at George Mason University, where she is Term Professor of Piano and Chamber Music. She also serves on the faculty of several summer music festivals in Italy, Germany, Russia, and the Netherlands. and is Artist-in-Residence at the Orfeo International Music Festival. Her students have won prizes at many international competitions, including the Rubinstein International Piano Competition and the Thomas and Evan Cooper International Competition, and currently perform and teach across the globe.

Dr. Balakerskaia received her Master of Music and Doctor of Musical Arts in Piano Performance, Pedagogy and Chamber Music from St. Petersburg State Conservatory, where she studied piano with Elena Gugel, Nadejda Golubovskaia, chamber music with Tamara Fidler, and accompanying with Sofia Vakman.