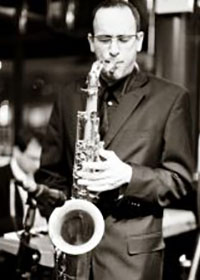 Originally from Miami, Florida Xavier has performed in 13 countries and 48 states with a wide range of artists in the jazz and Latin music worlds. Xavier was the only U.S representative selected to perform in the final elimination round at an international saxophone competition where he placed 2nd place out of hundreds of applicants from more than 20 countries.

Before relocating to the Washington DC metro area, Xavier was a freelance performing and recording artist living in New York City for 11 years. During his tenure in NYC he became a regular sideman at venues including, “The Blue Note”, “Smalls”, “55 Bar”, “Fat Cat, “Smoke”, “Birdland”, and “The Jazz Standard” among many others.

He has performed as a touring member of Paquito D’Rivera and The United Nations Orchestra, Maynard Ferguson Big Bop Nouveau, Jon Faddis Jazz Orchestra of New York, and Ignacio Berroa Quartet among others. He has shared concert, festival and night club stages with (in addition to the above) James Moody, Diane Schurr, Brian Lynch, John Fedchock, Eric Harland, Michael Mossman and more. He can be heard on recordings alongside of Mark Turner, Antonio Sanchez, Edmar Castaneda, Maurice Brown, Jaleel Shaw, and Sam Barsh.

In the Washington DC area Xavier has performed with The Smithsonian Jazz Masterworks Orchestra, The National Symphony Orchestra Pops, and The Bohemian Caverns Jazz Orchestra.

Xavier is currently assistant musical director and tenor saxophonist for the US Army Blues Jazz Ensemble the premier band of the Army, performing ceremonies and concerts at the White House, the US Capital, and in the DC metro area.