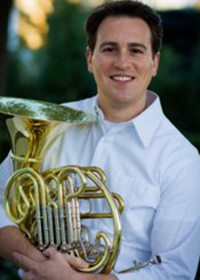 In addition to his performing, Mr. Nickel is adjunct professor (Applied Lessons, Horn) in the School of Music.  He also serves on the  faculty of Catholic University of America in Washington, D.C.

Professor Nickel earned his B.M. from the New England Conservatory of Music. He is a native of St.Petersburg, Florida, but now lives in Virginia with his wife Julianna and their two children.