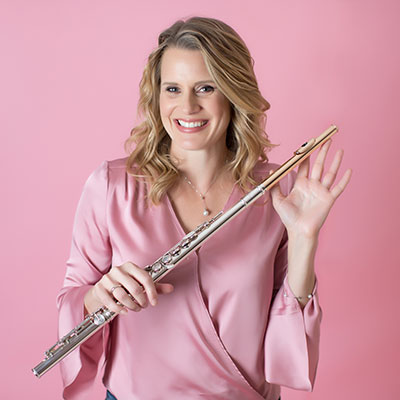 Julianna Nickel is a very active recitalist, teacher, and freelancer in the Washington, DC and Virginia areas. She is Adjunct Professor of Flute at George Mason University and a two-time recipient of Mason’s Distinguished Teacher of the Year (2019, 2017).

During the pandemic, Ms. Nickel and her family turned their driveway and neighborhood street into a concert venue that resulted in seven porch concerts. Colleagues and young musicians, including the Mason flute studio, performed on seven different concerts from May through September. The Nickel family also performed for the National Symphony Orchestra Musician’s live online NSO at Home Concert series in May.

Ms. Nickel has played chamber recitals in venues across the region including The Kennedy Center’s Millennium Stage, The National Institute of Health, the Alden Theater, historic Mount Vernon, Salisbury College, and George Mason University. Recently, Julianna has enjoyed working with the Boulanger Initiative in chamber recitals.

Since moving to the DC area, Julianna has also performed as a soloist with the American Festival Pops Orchestra, the George Mason University Symphony Orchestra, the George Mason University Wind Ensemble, and the Landon Symphonette. She is principal flute with the American Festival Pops Orchestra, a substitute with the Washington National Opera and the Manassas Ballet Orchestra, and a regular performer on the “In Your Neighborhood Series” presented by the National Symphony Orchestra each January. Additionally, Julianna is the Director of the Mason Community Arts Flute Camp that takes place each summer.

Julianna has adjudicated many competitions along the East coast, and has presented master classes at National Flute Association, the Mid- Atlantic Flute Convention, the University of Massachusetts at Amherst’s Flute Day, the West Virginia Flute Symposium, and the Richmond Flute Fest. Additionally, Julianna has performed and presented at multiple National Flute Association Conventions.

Professor Nickel maintains a large flute studio at Mason producing successful performers, teachers, art administrators, and technology specialists that are employed across the world. In addition to teaching at Mason, she maintains a dynamic studio of adult flutists. Ms. Nickel’s first teaching position was Flute Professor at the University of Evansville, Indiana. She also taught for the summer programs at the Kinhaven Music Schools in Weston, Vermont, and the Stellenbosch International Chamber Music Festival in South Africa.

Ms. Nickel’s GMU and adult students are highly successful in local and national competitions. Mason students have won masterclass spots at National Flute Association Conventions. Members of her studio have been selected as winners in the Collegiate Competition, the Masterclass Performers Competition, and the Adult Amateur Competition at Mid-Atlantic Flute Fair. For all but one of Ms. Nickel’s ten years at GMU, her students have won spots in the University’s Concerto Competitions for the orchestra and wind ensemble. Two students from the Nickel studio were selected as International Scholars in 2017 to travel to Costa Rica as part of Mason collaboration with Mason’s Potomac Arts Academy and Costa Rica’s music system, SINEM. They participated in an arts-based outreach program for Costa Rica’s challenged areas. Studio members are among Mason’s most valued students earring scholarships from the school and other organizations, positions as Mason Ambassadors, and many awards from the School of Music at their graduation.

Julianna attended the New England Conservatory Music where she received both her Bachelors and Masters of Music. Her teachers were Paula Robison, Fenwick Smith, and Leone Buyse. While at NEC, she was Principal Flute and Personnel Manager of the Gardner Museum Orchestra, a frequent Principal Flutist with the Vermont Symphony, and second flutist with the Boston Philharmonic. Ms. Nickel was a Tanglewood Fellow. She won spots in the prestigious National Repertory Orchestra and the National Orchestra Institute. She spent two summers at the Aspen Music Festival where she soloed with their Chamber Orchestra.

Ms. Nickel grew up in Austin, TX. As a high-schooler, she soloed with the San Antonio Symphony and the Central Texas Orchestra. Julianna is married to James Nickel, a French Horn player with the National Symphony Orchestra, and is the proud mom of Kathryn and Jonathan. Kathryn is a teenager pursuing all things related to her musical theater dreams. Jonathan loves the piano, competitive swimming, and all things computer-related.