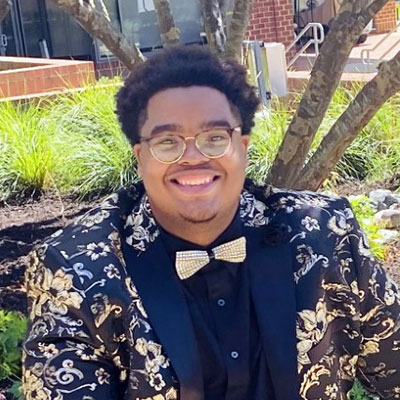 Jaelin, a native of Norfolk, VA is a music major with a double concentration in music education and vocal performance. He also minors in African and African-American Studies.

Graduating from Norfolk’s Booker T. Washington High School in 2019, he earned the title of salutatorian of his graduating class! He also attended the Governor’s School for the Arts where he was a member of the Vocal Music department.

In addition to being a Mason Music Ambassador, he serves as the Virtual Learning Community Mentor for the College of Visual and Performing Arts! Additionally, he is a proud office asHe also serves as treasurer for the Mason Chapter of ACDA and The Anointed Vessels of Unity. He believes that the development of the youth is quintessential to our community’s future. He says it’s our duty to nurture the future to be the best they can possibly be.