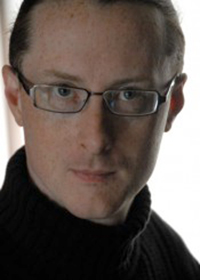 Dr. John Paul Healey has served on the piano faculty of George Mason University’s School of Music since 2004.  Since then he has performed with students, faculty members and as a soloist in most of the performance venues on campus.  He has been included as an annual faculty presenter in GMU’s Piano Pedagogy Seminars since 2009.

Dr. Healey has earned piano performance degrees from the University of Cincinnati College-Conservatory of Music, Texas Christian University and Truman State University in Missouri, each time receiving full scholarship awards.  Further studies in performance brought him to the Luzern Konservatorium’s Master Classes in Chamber Music (Switzerland) and the Internationaler Kammermusikkurs at Schloss Weinberg (Kefermarkt, Upper Austria).  He has performed solo, concerto, chamber and orchestral concerts in America and Europe, including performances of the Holocaust composer Viktor Ullmann’s piano music in German and Austrian synagogues. Locally, he has been heard in such venues as the Cosmos Club, the National Gallery of Art (Washington, DC), the Lyceum and the George Washington Masonic Memorial (Alexandria, Va.), Harmony Hall (Fort Washington, Md.) the Kennedy Center Millennium Stage, and McNeir Recital Hall, on the campus of Georgetown University.  A recording of his performance there with the Novella Chamber Players in November 2010 was recently featured on WETA radio’s Front Row Washington series.

He has been a visiting professor of piano at the University of Nebraska at Omaha and a faculty member of the Middlebury College German for Singers summer program (Middlebury, Vt.).  He has also been a featured performer and a master class clinician at Virginia Music Teacher’s Association state conventions.  An enthusiastic chamber musician, he collaborates regularly with members of the Kennedy Center Opera House Orchestra and the Air Force Band in chamber recitals.  He has been involved with the Levine School of Music Strings/Strings Plus summer programs since 2004, either as an accompanist, faculty member, or artist-in-residence.  He arrived as an independent music teacher in Northern Virginia in 1997, and since then has often served as an adjudicator for various local solo and concerto competitions.  Dr. Healey is a past president (2005-7) of the Northern Virginia Music Teachers’ Association. He lives in Alexandria, Va. with his wife, Carolyn and two sons.