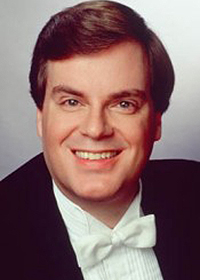 A renowned tenor, John Aler teaches applied voice at Mason. He has been a frequent performer with such orchestras as the New York Philharmonic, the Cleveland and Philadelphia Orchestras, the Los Angeles Philharmonic and the symphony orchestras of Boston, Chicago and San Francisco. He has sung in Europe with the Berlin Philharmonic, Leipzig Gewandhaus, Orchestre National de France, and the BBC Symphony, appearing with the world’s most respected conductors.  He has performed at the major opera houses of the world and is a regular performer at major American summer festivals.

Aler is featured on three Grammy Award-winning recordings in the role of Jupiter in an all-star recording of Handel’s Semele with John Nelson and the English chamber Orchestra for DGG, which won “Best Opera Recording;” Bartok’s Cantata Profana with Pierre Boulez and the Chicago Symphony Orchestra, also on DGG, which won “Best Classical Album;” and the Berlioz Requiem with the Atlanta Symphony on Telarc, which won for “Best Vocal Soloist.”  A recitalist of note, Aler has several recordings of chansons, Lieder and a solo album entitled Songs We Forgot to Remember on Delos. He recorded Bach’s Coffee Cantata with the Chamber Music Society of Lincoln Center. He is an alumnus of Catholic University and the Juilliard School.