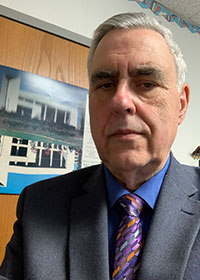 Director of COMPOSITION and Director of MUSIC AND WELL-BEING Programs, Dewberry School of Music, CVPA

Glenn Smith is a composer, teacher, performance-artist, and sound healer. He has written more than 500 pieces, including choral, chamber and orchestral works, as well as jazz and electronic music for concert, dance, video, film and television. He has taught at the college level for the past 40 years and has given numerous recitals and public performances as a composer and multi-instrumentalist.

His music has been performed in the U.S., Canada, Europe, and Asia and includes commissions from ensembles, institutions, and individual artists. Major performances include Carnegie Recital Hall, Wolf Trap Farm Park, National Gallery of Art, Library of Congress, CBC Television, local public and cable television and National Public Radio. He was the first composer-in-residence of the Fairfax Symphony Orchestra and several of his works are available on compact disc. His composition teachers were Fred Fox and Bernhard Heiden. He earned his BA in bassoon performance and an MA in Theory and Composition at California State University, Hayward, and received his doctoral degree in composition with distinction from Indiana University. He is a recipient of numerous composition awards from ASCAP, and has more than 40 chamber works published by Seesaw Music Corporation, NY, and MMB Music, St. Louis, MO.

In recent years, Dr. Smith has been composing music for healing and therapeutic applications. He is a certified Reiki Master Practitioner and has a limited therapeutic healing practice employing healing modalities that include Reiki, crystals, tuning forks, and overtone singing as well as theta-state meditational therapies using crystal singing bowls. His music has been used therapeutically in hospital intensive care units, with challenged children, and in a published music education study involving mood problems in elementary school children. He frequently gives lectures, seminars, and workshops on music and healing, and has performed regularly for the elderly at several assisted living centers in the area.

Dr. Smith has been a professor at George Mason University in Fairfax, Virginia since 1976. As Director of Composition, he currently teaches graduate and doctoral level theory courses and maintains a private composition studio. Several of his private students have won prestigious composition awards and have had their works performed throughout the metropolitan DC area.

He holds active memberships in ASCAP (American Society of Composers, Authors and Publishers), CMS (College Music Society), and ACEP (Association for Comprehensive Energy Psychology). He is affiliated with the Center for the Advancement of Well-Being – originally called the Center for Consciousness and Transformation.