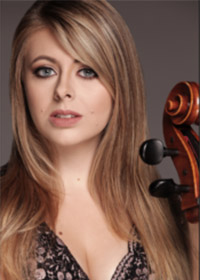 A passionate collaborator and advocate of 20th and 21st-century music, Racz is the founder and co-director of Audeamus International Music Festival, a performance and teaching festival in Zagreb, Croatia.  In addition to the annual festival in Zagreb, Racz has directed auxiliary concerts under the auspices of Audeamus in the United States, including “100 Years of Croatian Classical Music” at the Kennedy Center. In 2017, Prof. Racz has recorded chamber music of Robert Muczynski for a Dutch label Brilliant Classics.

In recent years, Prof. Racz serves as the principal cellist of the Pan American Symphony Orchestra and a cellist of D.C.-based piano trio Tango Camerata. She has collaborated with Piazzolla protégé Martin Leon, and the tango quintets Forever Tango and F-21. Moreover, Prof. Racz has presented various concerts of Central and South American music in association with the Latin American Music Center. Most recently, Prof. Racz appeared as a soloist with the Pan American Orchestra at the Kennedy Center presents the North American premiere of Arturo Marquez Cello Concerto Espejos en la Arena.

At the age of sixteen, Prof. Racz was awarded a full merit scholarship to study with Amit Peled at the Peabody Institute of the Johns Hopkins University, where she completed Bachelor and Master of Music degrees. Prof. Racz completed Doctorate in Music at the Catholic University of America, with a full scholarship and graduate assistantship in the studio of Michael Mermagen. Prof. Racz serves as Professor of Cello and Chamber music at the George Mason University School of Music and Catholic University of America.