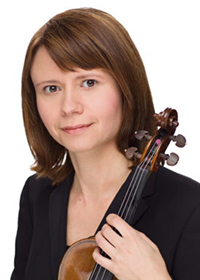 Joanna Owen joined the George Mason Music Faculty in the fall of 2019. She received her Master of Music degree from the San Francisco Conservatory and her Doctor of Musical Arts Degree from the Eastman School of Music. Her additional studies include Music Academy of the West in Santa Barbara, California, Accademia Chigiana in Sienna, Italy, as well as the Austro-American Institute in Vienna, Austria. Her extensive orchestral experience began with positions with the Rochester Philharmonic and the Syracuse Symphony. Locally, Dr. Owen is the Associate Concertmaster of the Maryland Symphony, member of the Eclipse Chamber Orchestra and has performed regularly with the National Philharmonic and the Annapolis Symphony. For four years she served as a contracted member of the National Symphony Orchestra, during which time she completed five international tours to five continents.

Dr. Owen has coached chamber groups at Mason Summer Chamber Music Intensive as well as the Summer Music Institute at the Kennedy Center where she prepared college level musicians for Millennium Stage concerts. As a chamber musician she performed with members of the Rochester Philharmonic and the US Army Field Band, to name a few. Recently Dr. Owen collaborated in a quartet performance with the Chamber Dance Project at the Shakespeare Theatre in Washington, DC.

Dr. Owen’s dedication to teaching began in her native Poland, where she co-founded Concertino, an organization that provides chamber music concerts for school children in the Warsaw metropolitan area. While with the National Symphony, she taught at the Summer Music Institute and coached string ensemble classes at the Levine school as a part of the NSO In Your Neighborhood series. She has coached All County Orchestras and prepared young musicians for leadership positions in area youth ensembles. She has also held teaching appointments with the University of Rochester and the Washington International School.