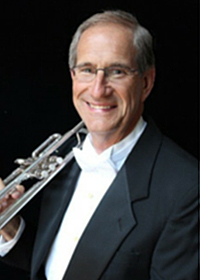 Dennis Edelbrock has performed with The United States Army Band and the Army Brass Quintet since 1975. Since that time, he has also written music used frequently at official state ceremonies at the White House, NBC’s “Christmas in Washington”, country music’s televised show “Nashville Now”, as well as music used in the opening ceremonies for the 1984 Los Angeles Olympic Games and Special Olympics. He is also the founder of The National Trumpet Competition and adjunct professor of trumpet at George Mason University and keeps an active performing schedule in the Washington, DC area. As an adjunct professor at GMU, he was awarded the prestigious “Excellence in Teaching Award” in 1996, one of only two faculty members to be recognized that year.

He has given masterclasses all over the world including the Moscow and St. Petersburg Conservatories.

The Army Brass Quintet entertains at the White House and has toured in thirty-eight states as well as twelve foreign countries. The Quintet has also recorded extensively and has performed on National Public Radio, The British Broadcasting Corporation, NBC’s “Today Show” and Fox television, The Prairie Home Companion, among others. The ensemble has been repeatedly chosen as the first to perform honors for newly inaugurated Presidents and also chosen for Capitol Rotunda State Funeral services for Presidents Reagan and Ford during national telecasts at the capitol. The Quintet has performed in a “live” Russian National TV broadcast in conjunction with the Russian National Orchestra.

The National Trumpet Competition, hosted at GMU, is the largest in the world and has provided performing opportunities for over 11,000 students since its inception in 1992. In exhibition concerts, it has featured such artists as Canadian Brass, Grammy Award winners Arturo Sandoval and Chris Botti as well as Doc Severinsen, Maynard Ferguson, Alan Vizzutti, Adolph Herseth, Tim Morrison, Jamey Aebersole Mnozil Brass, Philip Smith among many others. Its website hosts online masterclasses by some of the world’s greatest artists. NTC is supported, in part, by all the major trumpet manufacturers and has a budget of $80,000 per year.

In recent years, Edelbrock has performed with the Metropolitan Opera Orchestra, the Bolshoi and Kirov ballets, the New York City Ballet, American Ballet Theater, the Royal Spanish Ballet, the Kennedy Center Orchestra with whom he performed the world’s first web-cast as soloist in Handel’s “Messiah”, the Washington Opera, and the National Symphony Orchestra with whom he has recorded.

Performances with Classical Brass, of which he is a founding member, have been featured on local live radio broadcasts on NPR and broadcasts from The National Gallery. The Quintet does two national television broadcasts from the National Cathedral on Christmas and Easter mornings. Additionally, the group has commercially released compact discs including “Honor to Our Soldiers” (American Heritage Society) featuring performances on original civil ward instruments, “Christmas at the Cathedral” (Nonesuch) which has recently been nationally released, and “Music from America’s Golden Age” with the Columbian Brass Band.

Edelbrock has appeared numerous times as a soloist with the Kennedy Center’s Washington Chamber Symphony on NPR. He is an original member of the Washington Bach Consort which holds the honor of being the only American ensemble invited to perform at the Bach Tri-Centennial in a Leipzig Gewandhaus performance which was broadcast on East German State Television.

He has performed on screen as a soloist in the video version of “Contact” (Sony Pictures), “Wag the Dog” (Miramax) and was featured on the filmscore of Tri-Star’s motion picture, “Gardens of Stone”. Edelbrock has also been a frequent performer on the “Discovery Channel” sound tracks.

A native of Iowa City, Iowa, he is a graduate of the University of Iowa. He completed advanced studies at the Catholic University earning both a Master of Music Performance and Doctor of Music Arts degrees. He devotes as much time as possible to volunteer work with local youth groups and resides in Arlington, VA with his wife Laura, a pianist and choral director, and fifteen-year-old daughter Emma.