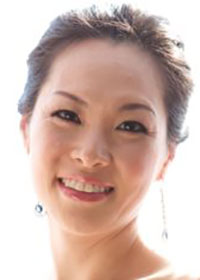 Estrella Sejin Hong, a native of Seoul, South Korea, was a doctoral piano student of Dr. Linda Apple Monson. She completed a Bachelor of Arts Degree in Music from Mason in 2016 and graduated in May 2017 with a Master Degree in Piano Performance at George Mason University under the tutelage of Dr. Monson. She began playing the piano at the age of three in her native Korea, and as her family moved to Argentina, she studied piano at the National Conservatory of Music in Buenos Aires. In the States, she earned a Bachelor of Science in Biochemistry from the University of California at Los Angeles. Later, she collaborated to do graduate research in Chemistry Department at Harvard University, with her outstanding work resulting in three patents. Estrella has been fascinated with both music and science throughout her life that she is interested in promoting STEAM as a future educator. After she graduated with her DMA in Piano performance in 2020, she started teaching Keyboard Skills at Mason. Estrella is a fluent speaker of Spanish, Korean and English.