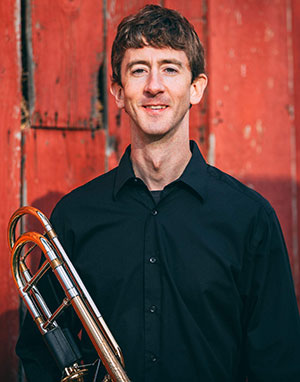 Gregory Freeman is an active trombonist and educator in the Washington, D.C. area who also doubles on euphonium. A native of Alexandria, Virginia, Gregory grew up immersed in the vibrant music scene in metropolitan Washington and studied trombone with Scott Shelsta of Pershing’s Own U.S. Army Band. Gregory received his Bachelor of Music Education from George Mason University where he studied trombone with Dr. Paul Schultz, and conducting with Anthony Maiello. He earned a Master of Music in Trombone Performance from Northwestern University where his teachers included Michael Mulcahy, Charles Vernon, Scott Kinmont, Gail Williams, and Jay Friedman. He also was fortunate to study conducting with Dr. Mallory Thompson.

Gregory has enjoyed a varied performing career and has played for audiences all over the United States and abroad. He has performed with the Fairfax Symphony, Washington Symphony, Capital Wind Symphony, and is a member of the Dominion Brass in Northern Virginia. Gregory is currently the trombonist with the Monumental Brass Quintet based in Washington, D.C., and can be heard on several recordings including “Sacred Circle” with Monumental Brass and “Ite Missa Est” with the Dominion Brass. He has performed with the Rodney Marsalis Philadelphia Big Brass on both trombone and euphonium throughout the United States and China. Two of his most memorable musical experiences include performing for a national television broadcast at the National Center for the Performing Arts in Beijing, China, and playing the antiphonal music of Giovanni Gabrieli inside St. Mark’s Basilica in Venice, Italy. While a student at George Mason University, Gregory performed as a member of the Disney Collegiate All-Star Band, and had the opportunity to perform for thousands of people and work with some of the top studio and jazz musicians including Alex Iles, Jiggs Whigham, and Wayne Bergeron to name a few. Gregory also appeared as soloist with the George Mason University Symphony Orchestra. Gregory is very active as a music educator.

He is sought-after as a low brass clinician in Northern Virginia, and works with a number of schools coaching trombone, euphonium, and tuba sections in some of the top band programs in Fairfax County, Virginia. He maintains a large private studio, and has also taught in Howard County, Maryland and at the Levine School of Music in Washington, DC. For over 15 years Gregory has served as Director of the Robinson Trombone Choir at Robinson Secondary School in Fairfax County. Under his direction the group has appeared twice at the American Trombone Workshop, and also had the privilege of participating in the Towson University Trombone Ensemble Workshop Day in 2014, hosted by Dr. Natalie Mannix, as well as the George Mason University Trombone Day in 2020 and 2021 hosted by Dr. Alan Carr. As a member of the Monumental Brass Quintet, Gregory has been the trombone instructor for their annual Summer Brass Institute for several years, and has been honored to work with countless brass students as well as fantastic guest artists including Scott Hartman, Martin Hackleman, Carol Jantsch, and Chris Gekker to name a few.

Recently, Gregory presented a solo recital and masterclass at Marywood University in Scranton, Pennsylvania. Gregory lives in Alexandria, Virginia with his wife, son, and daughter. When he is not busy with musical activities, he enjoys traveling, visiting national parks, and hiking/climbing mountains.