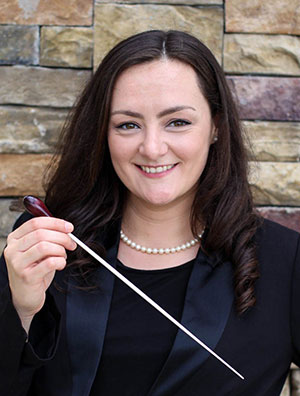 Samantha Clarke, conductor and flutist, is a Long Island native of East Rockaway, New York. Ms. Clarke is thrilled to be pursuing the Doctor of Musical Arts (DMA) degree in conducting at George Mason University, working as Doctoral Assistant Conductor to the Symphonic Band and Wind Symphony, and a Graduate Teaching Assistant in the School of Music. Ms. Clarke is studying conducting with Professor Mark Camphouse and flute with Professor Julianna Nickel. Ms. Clarke is also a member of the staff at The Mason Community Arts Academy, where she coordinates instrumental music education outreach in local schools through their Instruments in The Attic donation program, and virtually through their Creative Collection webpage.

Ms. Clarke has taught music and band at the elementary, middle and high school levels on Long Island. Additionally, Ms. Clarke served as Associate Conductor of the Long Island University (LIU) Post Wind Symphony from 2017 to 2019. Ms. Clarke holds both a master’s degree in conducting and a bachelor’s degree in music education from LIU Post. While pursuing her master’s degree, Ms. Clarke served as the Graduate Assistant Conductor to the Wind Ensemble, Wind Symphony, String Ensemble and Orchestra, studying conducting under Dr. James McRoy and Professor Maureen Hynes. Ms. Clarke was also very fortunate to have studied flute with Karla Moe for 10 years.

As an avid performer both as a soloist and chamber musician, Ms. Clarke has been a flutist and woodwind teacher for the Songe d'été en musique School and Festival in Quebec, Canada since 2012. Ms. Clarke has also performed abroad in Puerto Rico with the LIU Post Wind Symphony and in Australia at the Sydney Opera House as principal flutist of the Long Island Symphonic Winds. In June 2019, Ms. Clarke had the honor of receiving an invitation to play flute with The United States Air Force Band (Washington D.C.) in rehearsals and performance as a part of the National Band Association’s Young Composer and Conductor Mentor Project.

Ms. Clarke’s performance honors include participation in the Long Island Flute Club Competition twice, placing first in 2012 and third in 2011. Additionally, she was featured as a soloist with the LIU Post Wind Ensemble at Tilles Center in April 2014 as a winner of the LIU Post Concerto Competition.

As an author, Ms. Clarke completed a Music Education Research Study for her master’s thesis in 2017 titled: “A Comparative Study of Best Teaching Practices Across Three High School Performance Ensembles: Band, Chorus and Orchestra.” More recently, Ms. Clarke published an article in the Summer 2020 National Band Association (NBA) Journal, a book review in the 2019 College Band Directors National Association (CBDNA) Fall Report and has a contract with GIA Publications (Chicago) for a book detailing the life and teachings of Anthony Maiello. You can visit her website at samanthakclarke.com.