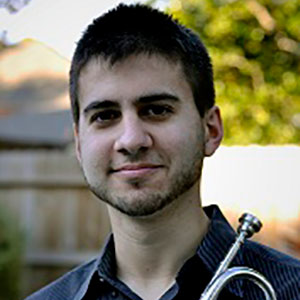 Tyler Mire is a trumpeter and award-winning composer/arranger who has had the pleasure of performing with The Mavericks, Sam Moore, The Temptations, Frankie Valli, Aretha Franklin, Tierra Cali, Idina Menzel, Mike Ferris, Anderson East, Wayne Bergeron, Lyle Mays, John Clayton, Conrad Herwig, Terrell Stafford, Andy Timmons, Chattanooga Symphony and a slew of other notable music makers. As a performer Tyler has traveled to Europe, Canada, and all over the continental United States. In addition, Tyler has recorded sessions for Tokyo Disneyland, SeaWorld San Diego, Marty Stuart, Tim Rushlow as well as various gospel, pop, and country artists. From 2016 to 2021, Tyler was the split-lead trumpeter for the United States Navy Band Commodores Jazz Ensemble, based out of Washington D.C. As an educator, Tyler has taught at Belmont University and numerous clinics around the country.

As a composer/arranger, Tyler has worked with some of the finest artists in Jazz having done commissions for Jeff Coffin (Bela Fleck, Dave Matthews), Stockton Helbing (Maynard Ferguson, Doc Severinson), and various schools throughout the country including the nationally recognized McMath Middle School Jazz Ensemble to name a few. Tyler’s accolades are numerous including his band “The Sweatervescence’s” win of the Student Downbeat Award for “Best Blues/Rock/Pop Group”, his Student Downbeat Award for “Best Jazz Arrangement” for his arrangement of “Confirmation”and the 2012 JEN Student Composition Showcase Award for his original big-band piece “Be That Way”.

A life long gamer, Tyler has also become an in-demand composer for video games. Credits include “Shadows of Adam” where he composed a 44 original track Official Sound Track for the project. Other projects can be heard on his game audio page.

During Tyler’s time spent at the University of North Texas (Bachelor of Music 2010, Masters of Music 2012) he studied under the tutelage of Jay Saunders, Akira Sato, and Rich DeRosa and spent two years in the six time Grammy nominated One O’Clock Lab Band (appearing on “Lab 2010” and “Lab 2012” ) as the second and then lead trumpet player. During Tyler’s undergraduate studies he also took advantage of a summer 2010 opportunity to be a part of the Disneyland All-American College Band playing split-lead trumpet.

Tyler also runs an 18 piece big band, the “Tyler Mire Big Band” where he plays trumpet and composes/arranges. The band has released three albums, “Enter the Atmosph-Mire”, “Movin’ Day” and “#Officefortheday”. All of Tyler’s CDs are available on CD Baby, Itunes, and Amazon.