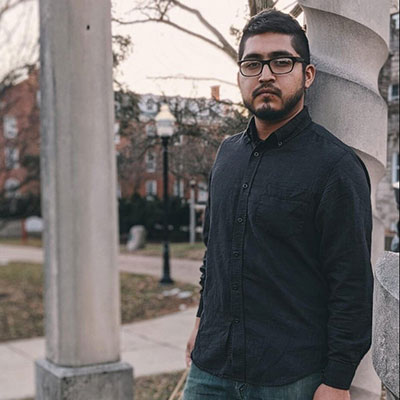 Elliott Godinez (b. 1995) is a first-generation American who advocates for equal accessibility in music. An inner-city Chicago native, his musical expressions have been described as creative, emotionally charged, and thought provoking.

Godinez earned a Bachelor of Music Education degree from Illinois State University in 2017. In addition to his extensive freelance teaching in Central Illinois and the greater Chicagoland area, he has served as the music director of the New Holland-Middletown ESD# 88, the assistant band director at University High School (Normal, IL), the battery caption head for Bloomington High School (IL), and most recently as the percussion graduate assistant at ISU where he earned his M. M. in 2021. His musical output includes multiple recordings, musical arranging for high school front ensemble, and several collaborations with composers.

Currently, he is pursuing a Doctor of Musical Arts degree at George Mason University.